Burning Man the Annual Popup and Burn Down City

After traveling solo to explore North America I meet a Canadian couple in the middle of a lightning storm and after explaining my story and showing them some photos they told me I just had to go to Burning Man (Which was only a couple weeks away). I explained the difficulties of finding a ticket to the sold-out festival. But it was made clear to me, by them, that if I truly believed I could make it, I would.

Crossing the US border one week later I found myself with a few hours on a bus and started to search Craigslist for a ticket. I found a vast amount of scammers some of which I contacted… However, there was one ad that popped up while I was searching that seemed legit. Later that day in Seattle after reaching my accommodation I received a message saying that if I wanted the ticket to meet up. So I did, she turned out to be a very nice lady who had to sell her ticket as her mother had fallen sick. I showed her a few of my photographs and told her my story, she seemed very relieved that the ticket was going to someone who actually wanted it and not just someone trying to resell it for a profit. So, I had a ticket! 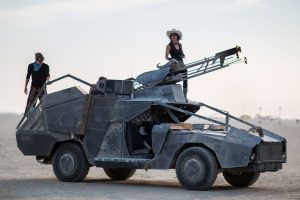 Then the realization set in, I actually had no idea how I was going to get there, or how the I was going to survive in the middle of the desert. I started researching, the information was grim at best, sandstorms, torrential rainstorms, mud, dust, and the equipment I needed… Star pickets? camping equipment, a bicycle, goggles, breathing mask, food, water. Basically, all I had was a backpack filled with cameras and lens and a can-do attitude.

After a great week in Seattle, I found myself on a plane headed to Reno to meet a bunch of travelers headed into the desert on the Burner Express. I touched down in Reno and hit up the local Walmart. So, I had, a tent, a bike, water, food… that’s it. I rode my brand new bike carrying all of my stuff to the bus down the side of a road in a city I had never been to. Yep, I had legit turned into a nomad, a traveler, with my destination, adventure. 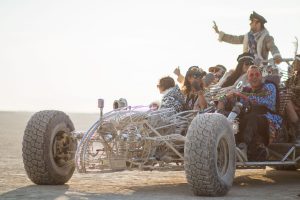 After a 6-hour bus ride into the desert through what I can only describe as a dry, arid, lifeless, landscape, we had arrived right in the middle of a massive sandstorm. I remember thinking wtf have I got myself into. With almost zero visibility I pitched my tent and put my stuff inside. Well… What now?

I jumped on my brand new bike and went for a ride through Black Rock City. Almost immediately the sandstorm past and visibility turned to a dusty haze. I have heard people explain the city as looking like something out of Mad Max, but I can tell you honestly, it didn’t really look like that to me, well not at first. The temporary city was covered in dust, it was everywhere. The streets were littered with burners, clusters or people having small impromptu events. They were gathering anyone they could find by tempting passers-by in with cold drinks and the promise of gifts. 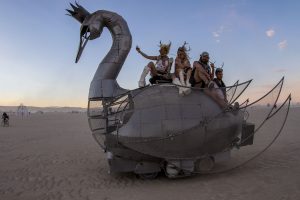 After several of these smaller camps, I rode out onto the Playa and headed directly for the temple at the very center of the giant festival. It was at that point I realized I had indeed made it. The dusty silhouettes of other party people riding bikes, the crazy costumes, the uncanny vehicles, and the super impressive sculptures and artworks. It was a dream-like vision of which I don’t think I really ever became used to

7 days later having danced at times all night and through insane dust storms and amazing sunsets… To put this into perspective, how many people can say they have witnessed giant fire tornados at sunrise ripping through a pyramid of fire. All I can really say is that at times it was an intense and surreal experience. When I tell people I went it’s meet with such mixed interest and sometimes absurd comments. Most people who I have talked to about it, who haven’t been, have an opinion about the festival. From a drug fulled sex party, fake art festival, money generating generation, populated with self-absorbed brain dead attendees. Maybe all those things are true, all I know for sure is that I had a great time, with my experience getting better and better every day.